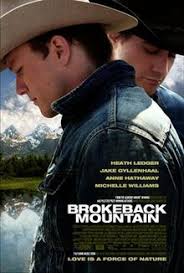 After a number of months hearing once and again a ton of good comments about ìBrokeback Mountainî movie I finally had the opportunity to watch this movie in the theaters. I know I’m kind of late, even Oscars have passed, but it took sometime for the film to arrive in my town.

Curious sensation what I felt when the movie started playing, after hearing so many comments about the film I was at the point from which I already knew, at least from the morbid side, what the story was about and who was whom on the screen. At least that’s what I thought.

It all starts in the distance; one truck passing by the hills and then we find one young man outside an office that seems to be far away from everything. Then our second character arrives almost pushing his old black truck. It is now that we realize what they are looking forÖthey need a job.

They are hired to take care of sheep in the mountains of Wyoming, they will spend the summer together in the mountains, they will live and work side by side during all those days. As they arrive to their destination, ìdel Marî , feeling more confident, releases a few words from his mouth and starts talking a bit more and showing some signals of sympathy to his buddy. He is a tough young man with a family history with resemblance of a nightmare from one of those Dickens stories. No one suspects anything ìout of normalî is happening in the story. Days seem to be passing without any great novelty.

But something new happens, something out of the regular tasks of those working days and nights at ìBrokeback Mountainî. Something has arisen between the two men, it is like a storm coming from nowhere that has entered their lives and that will mark them forever. It seems to be just a passionate episode of the lonely at the beginning, a dream that none will ever know. But reality dictates something different, what just happened, will continue happening once and again, they are attached forever by a force that makes or bends the will of anyone; something we may call, love.

Summer is over and both men must go back to their worlds away from the mountain, to their previous lives, but inside them in a secret place they know those lives exist no more. They have been confronted with their most inner reality and it won’t go away.

They will marry wives and strive to pursue a ìnormalî life just to realize they are being a pair of fakes. They don’t belong to that traditional society, they belong only to each other since those day in the mountains. They finally decide and meet again outside ìdel Mar’sî home, a poor second floor apartment. He hasn’t had much luck in life since childhood and it seems to accentuate everyday, now even his wife knows about his preferences. We are inclined to conclude his only luck and fortune in life is what he feels for Jack, his ìfishing buddyî.

Things go wrong at ìdel Mar’sî home, marriage brakes and he is left alone fighting for life in a society that would stone him to death if they only knew. But there are bright moments too, and those happen at ìBrokebackî where he regularly meets Jack who travels from far away Texas to meet the only love he has known.

By the end of the story there have been conflicts arising between the partners; too much distance and just a scarce proximity can not improve any relation. They have just had a bad encounter in their paradise, they part away with the promise of meeting again and fix what can be fixed when suddenly the story takes us to a scene where ìdel Marî receives the notice of Jack’s death in a cold post card with letters that say ìdeceasedî. Everything indicates he has been murdered, he was caught by those who won’t let the ìothersî happen. And now Ennis del Mar has been left aside from society, with his love eternally longing for Jack and a daughter that will get married soon and who doesn’t know his dad is a loner for a reason; and love won’t count.